Looking for a challenging project with the Axminster scroll saw chose the automaton Humming bird. A fascinating foray into Hypocycloid gears requiring both scroll saw to cut over 130 pieces and a wide selection of hand tools and drill press to build the model. The Hummingbird swoops forward to take nectar from the flower flaring its tail as an air brake with a beautiful circular motion of its wings, then withdrawing ready to begin a further cycle. Can recommend this project. 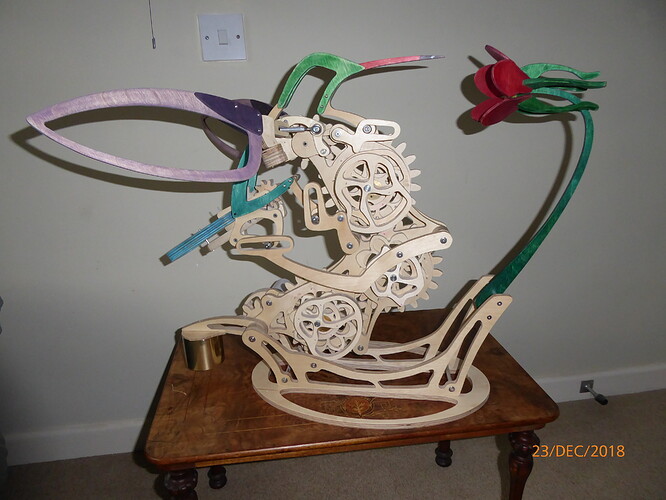 That is quite some project, but where did you find the plans? how many hours did it take you? can you upload a video? So many questions - it is so interesting.
Well done, Philip.

The design is by Derek Hugger and his work can be found at Kinetic Art Woodworking Plans by Derek Hugger, he provides superbly detailed plans. You can see videos by clicking on the models on this site also there are YouTube videos of completed projects. As to hours I did not keep tabs, the cut out on the scroll saw took me an initial two weeks but the real work of metal cutting and thread cutting then fettling the build and de-snagging a lot longer. Getting the hypocycloid gears to work was quite a task with several iterations of the central offset hub and the gears themselves.

Another challenge was presented with the design all based on USA Imperial tools and materials, the choice was between staying with the USA design as much as possible or adapting everything to metric and local supply, I went the first route as I was able to collect a pre-ordered kit in the USA when I visited my son in California. As the UK has moved relentlessly to metric and smaller model maker suppliers have disappeared it proved a lot of effort to find Imperial cobalt taps and drills, as well as finding a supply of quality beech ply. The parts I purchased in the USA such as the track rod pieces for the wing motion were superior to anything I located in the UK, as were several of the connectors with slimmer better shaped heads. I believe at least one person in the UK has completed a wholly metric converted project. This page gives you a good perspective on the detail of the plans and tools required: Colibri (derekhugger.com) It is an attractive project for Axminster sales considering the tool set required.

As you say there are myriad questions to cover and I would be happy to collaborate if you were interested to undertake this project. I am quite keen to see an uptake here. It was nice to rope my 12 year old grandson in at one stage and I introduced him into cutting the metal pieces and drilling out and tapping the threads, he became quite interested and adept at thread making without any tap breakages which is quite an achievement when using small tap cutters. At one point I had him close his eyes whilst going through the forward reverse routine to just feel the cut, his comment made the day ‘that is really satisfying’.