Do I need a Biscuit Joiner?

Hello, I’m a retired hobby woodworker with a reasonable degree of skill but still learning a lot. I’ve made small tops for boxes by jointing wood strips. I plane then glue and clamp and finish and have been very pleased with the results. I’m now thinking of making larger items with, for example at 1m x 1m square top with 3 or 4 pieces of 25mm thick wood (probably beech in first instance. My question is, can I adopt the same technique scaled up or would I get a much better (and stronger result) adding in a Biscuit Jointer to the process. I have my eye of the Makita that Axminster sell but am not wanting to buy unnecessary kit if I can do just as good a job without it. Any thoughts gratefully received. Keith

I’d suggest that biscuits/dowels/dominos in this instance might help with alignment when gluing large panels, but if you’re gluing long grain together with a decent modern glue then I don’t believe it would aid the joint strength; at least, not that you’d need with 25mm thick panels.

Assuming the edges are planed accurately straight and square, a simple butt joint will be perfectly adequate and the use of jointing biscuits will not add any extra strength. They will however make the alignment of the panels easier when cramping together. If you are using PVA adhesive, the open time for assemble is quite short, so if the panels are built up from quite a few boards, it would be best to cramp them together in several sub-assemblies to ensure the adhesive does not start to dry and give you a thick weak glue line.

Hi Badger, completely agree with Gordon and Jeff - the issue is alignment not strength (in my experience biscuits do not add perceptible strength). The platinum solution is a Domino, but appreciate you won’t want to go down that route yet. I would imagine that dowels would be very tricky even with an appropriate jig - never tried it. Note that biscuits will provide critical vertical alignment but are less useful for horizontal alignment. Another - no cost - option is to use clamping cauls - make sure you use greaseproof paper (my favourite) or something PVA proof to ensure your cauls don’t become a permanent part of your new panel

As a final comment - sorry if I’m teaching to suck eggs - don’t over-tighten the clamps when glueing your panel. That may have the effect of distorting the panel and weaken the joint by draining the surfaces of glue. It took me way too many years to work that one out!

Dear Gordon, Jeff & Chris. Thanks so much for your very helpful replies full of excellent ideas new to me! Lots to try out before I think about buying another piece of kit! Best wishes Keith

Biscuits, doms et al can help with alignment. On the other hand, if you get their placement just a bit wrong, they make alignment impossible. Some biscuit joiners are not known for their precision and can introduce mis-alignment with every use. (You get what you pay for).

Some timbers don’t glue that strongly - the oily rascals such as teak, iroko and similar can fail to absorb glue if they’re particularly oily specimens. In this case, biscuits and dominoes can help keep the boards together. They do it more by swelling in their slots than via the glue, as the swelling tightens them immensely in those slots so they act like permanent internal clamps.

Alignment via cauls is certainly possible. But it complicates the clamping & gluing process as the cauls as well as the boards and the clamps all have to be aligned properly. The best cauls are slightly bowed so the convex bit in the middle clasps the boards first and the clamp at either end gradually presses the whole caul down on the glued-up workpiece. So you have to make the slightly-bowed cauls …

Rather than buy a biscuit joiner or domino just to help with alignment, why not buy a plano press instead? I used one of these for many years before having to sell it as a house move meant no room for many of my former tools. The plano press is the ideal tool for gluing up large and small flat items made of several edge-joined boards. Not cheap … but less than a Domino; and no expensive add-ons to tempt you either. 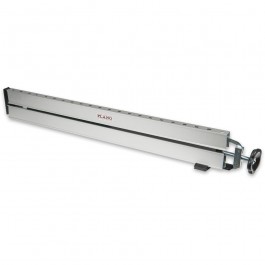 Two age old problems associated with gluing up panels are the amount of space required when using traditional sash clamps and the tendency of the panel to distort under the weight of the clamps. With the aid of some very clever design work the PLANO...

Another alternative, requiring you to make those cauls: 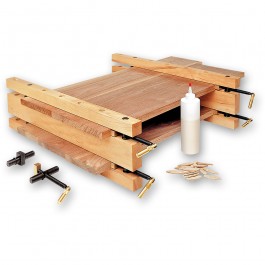 Bowed panels can be a thing of the past. This Veritas® product is the most effective panel clamp available. It is easy to use, tightens by hand, and is stackable for production work. Best of all, you can make double clamp bars of any length to suit...

I have some of these and they work well - a combined clamp and caul, really.

Thank you Lataxe. Some food for thought there. Best wishes Keith

It all depends what is going to be put on the table. If it is for light duty simply gluing with PVA (Titebond ultimate?) would probably be fine. If it’s going to have a heavy weight (an old TV?) on it for a long time you might find there is some creep.
Three solutions to this: Use Cascamite (which has a nice long open time too), or use loose tenons (biscuits or Dominos) or a zig-zag joint if you have a router table: 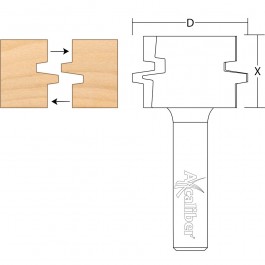 The Reverse T&G Cutter works in a very similar way to a tongue and groove cutter. It is suitable for the accurate jointing of materials to form wider panels for items like table tops. The interlocking profile increases the gluing surface and...


I used to have an Axminster White biscuit jointer (no longer available) but upgraded to a Domino which I love. Nothing wrong with a biscuit jointer but Dominos are stronger.
Incidentally in the thread was a link to the Plano clamps; I have them and they are dreadful. I’m in Cornwall and if you can collect you can have three and the rail for free. Hardly used (twice?). PM me if interested.
Andrew
Woodbloke 28 May 2020 15:25 #9

Yep, you still need one. I’ve got a Lamello C2 which gets an occasional airing. I use a Festool Domino for lots of stuff, but sometimes a biscuit joint is more appropriate…horses for courses.

What’s up with your plano press then? I used one for years and really miss not having it now. (Nowhere to put it now). Easy to fill with the gluey-edged planks, makes the glue-ups flat as well as stuck together and is out of the way on the wall. And the plastic-edges on the aluminium vertical arms mean that any glue squeeze out that dries on is easily knocked off.

What bother did you have with yours?

Dreadful engineering; the clamps would not reliably park at the correct height, and would drop down one or other side so that I couldn’t clamp it up. Frankly I see the Plano as a solution in search of a problem; if your planks are nice and square they will glue up flat with regular clamps.

Thanks again for all the advice. I thought it might amuse to recount the outcome! I decided to bite the bullet and get a Biscuit Joiner. Axminster, with their usual efficiency, sent me the Makita and an nice assortment of biscuits. I had some fun with it and wondered what else I could use it for. Answer was, of course, not much other than what it is designed for!! Sooooo- I looked long and hard at a Festool Domino 500. I drooled and dreamed and the nice people at Axminster had a Package deal for a new shiny Domino DF500 in a Systainer and another Systainer full of Dominos and various guides, bits etc!! The DPD man is a great friend of mine by now and the big boxes arrived! Its going great guns and now — of course ---- I have some more systainers and sortainers to stack up and fill with “stuff” - Clever chaps these Germans!!

Hey, i think you can go for a Biscuit Joiner as it’s totally worth investing in a good quality biscuit joiner. They won’t be used as much but they play an important role in the alignment of your material.
If you want to know whether you should purchase it or not then you can read this article where they discuss pros and cons of various biscuit joiner including Makita 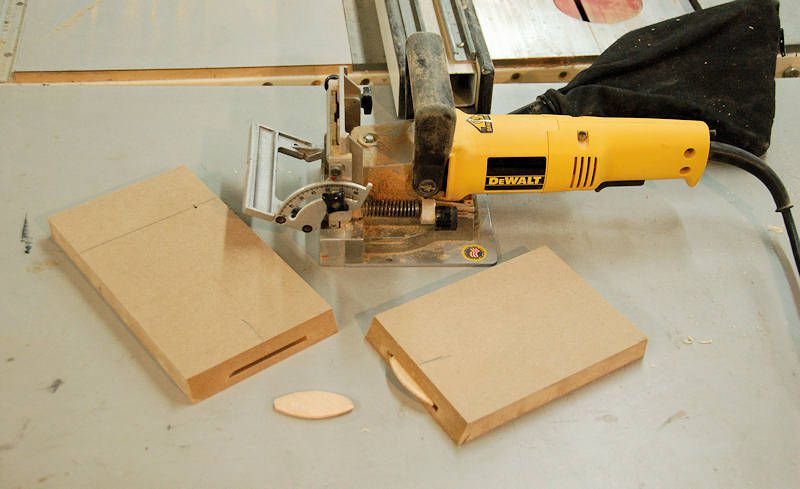 Also known as a plate joiner, a biscuit joiner is a tool which helps you join 2 pieces of wood together. It needs glue and wood biscuits to create a joint between the two wooden surfaces. If you have tried to make these joints manually, you...

Hi, I used a router with a 6mm flute bit to make slots for home made biscuits when making a 10cm thick workbench top. Aligns perfectly. For thinner panels I simply clamp the boards and align with wedges between the boards and the clamps.