Hi all and especially any fire officers within the Axminster community.
Last week I had the misfortune to have a fairly intense fire against my outside workshop wall. All the soffit etc was melted and when the fire brigade arrived a fair bit of water went inside my workshop and in particular my band saw had a fairly good soaking.
Now for my question!!! do the fire brigade have any additives in their appliance water tanks? The aforesaid band saw table has rusted in a way I have never seen on a cast iron bed before. It appeared within hours and has been a devil to shift. I have resorted to scraping the surface and have used oils and waxes but it really is quite difficult to get rid of.
I have two theories. 1st is that they have a fire retardant in the water tanks and the 2nd is that as I live very close to the sea - they fill their tanks from the beach.

Have a great one and keep on turning. 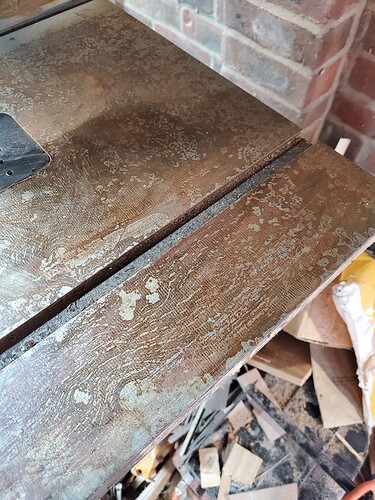 Hello Steve
I spent 31years in the fire service and never added anything to an appliance water tank. There is an additive for backpack equipment used for grass fires, we joked that it made the water wetter. We would never use salt water as it would damage the pumps but as you state you live very near the sea ,it could be that healthy sea air. Could you claim on your home insurance and treat yourself to a new saw.
Regards
Dave

Hi Dave and thanks for your info.
Luckily my saw is still fairly new and I have cleaned it up pretty well. On the down side my insurance bill is up to just over £1200 for garden furniture etc, plus somewhere in the region of £6000 for new soffits, guttering, garden wall and block paving that was all badly damaged. It was quite a small fire but burned incredibly hot as the fire spread from a garden incinerator to my petrol brush cutter. The petrol tank melted and spread the fire very quickly into what became a wind tunnel under the furniture etc. I looked a right idiot with my garden hose when the fire brigade arrived. I was creating lots of steam but the fire kept on burning. The fire officers looked quite smug when they opened up their hose and doused the flames in under 10 seconds.

What would we do without them as well as all the other emergency services. Hats off to you for you service and all the others out there protecting us every day.

I suspect it is just a case of how fast clean steel reacts with water & oxygen to create rust. Have a look at train tracks after rain and you will see that even after an hour or so there is a noticeable coating of rust. Assuming of course another train has not come along to clean the rust off.

Sorry to hear of your unfortunate fire, but on a positive note is sounds like nobody was hurt.

You might try using sandpaper to help cut back the rust and restore the saw bed. If you use a fine or medium grit paper under flat block it should cut through the rust fairly easily. Take care to apply even pressure and then finish off with a very fine paper, followed by furniture wax. I’ve used this technique before and the results can be as good as new.