An interesting article has just appeared on ‘The Knowledge’, where the Woodcut MAX3 Bowlsaver has been put through it’s paces. I bought the original version a few weeks ago when it was heavily discounted, but I haven’t had a chance to use it yet.
In the article the operator doesn’t appear to have turned a tenon on the core prior to removing it from the blank, which is an essential part of the process and means that he may encounter some difficulty in holding it the chuck later on. 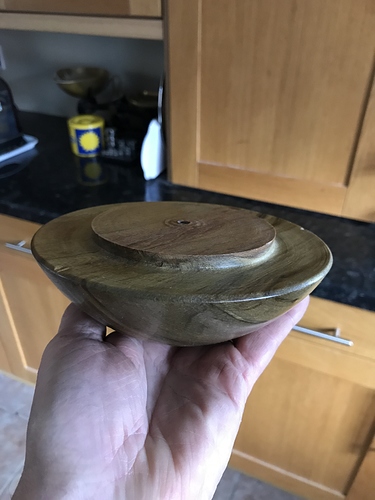 This is a core in Ancient or Swamp Kauri which is nearly 4000 years old and you can clearly see the tenon that Rick turned before it was removed from the blank.

Max was also turning a green Ash blank and used ‘C’ jaws for the job. Clearly they were adequate in this case, but had the blank been dry and much harder (as in the pic) it may have completely broken out of the chuck. I was advised to use the largest tenon possible to grip the blank; the one shown in the pic is 100mm.

The core shown was polished and dispatched from NZ as a ‘paperweight’ as it’s now illegal to export ancient Kauri in log or plank form (the Chinese are to blame here) unless it’s been finished into a recognisable item.

Regret that I cannot agree your statement that turning a tenon on the blank before it is cored “is an essential part of the process”.
I attended a demonstration by Phil Irons, about 12 months ago, where he used the Woodcut MAX3 Bowlsaver to core a c430mm wet Willow ‘blank’ - producing 4 bowl cores, of which only the largest had a tenon.
Phil offered these blanks to the ‘audience’ and, as only two of us showed any interest we had two each. I had the two largest blanks as the other person was unable to accommodate either of them on her lathe.
Early this year I decided that it was time to make them into bowls. I mounted the smaller one (c330mm diameter) between a faceplate drive and tailstock centre, turned a tenon and the outside profile, and then rechucked it to turn the inside.
Having suitably protected the smaller bowl, I then mounted the larger blank between it and the tailstock centre to refine the, now oval, tenon and shape the outside of the bowl. Reversed into the chuck, I completed the inside of the bowl, and then removed the tenon by remounting as I had done to do the outside.
The smaller bowl was then remounted between the faceplate drive and tailstock centre for tenon removal/foot refinement.

The demonstrator on the Knowledge article only needed to drill a hole in the top of his cored blank to mount it in a screw chuck and proceed from there to completion, in the (fairly) standard way.

My experience of the Woodcut MAX3 Bowlsaver is limited to the demonstration (during which I did core on of the blanks) and finishing the two bowls, but it is my belief that that it is a very worthwhile tool - robustly built, and easy to use. That said, at £400 it is only for the turner who specialises in bowl turning from large/expensive blanks.

I agree that one should use the largest tenon possible when using this tool.

Looks like you found a good ‘workaround’, but a few piccies would help enormously as it’s a bit difficult for a learner turner like me to follow the process.

Sorry, but I don’t have any pictures of the process to share. (Also, I have yet to find out how to post pictures. I’ve looked at all the ‘buttons’ but can’t find one that seems to fit the bill.)
Perhaps you could ask a member of your local Woodturning Club to explain it, or talk to the turner at your local AT&M store.

Posting pics is easy; drop the pics onto your desk top and drag them into the box where you type. They then just load up.

Many thanks for that tip - and just to prove how easy it is here is a picture of my finished bowls. 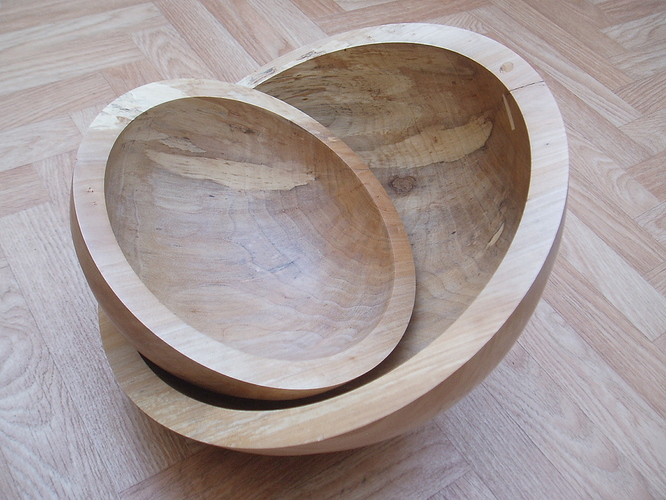 Nice bowls! I’ve yet to try out my Bowlsaver as I haven’t yet got hold of a suitable blank(s). I got hold of a lovely load of cabinet quality timber at the weekend but unfortunately the bowl blanks I bought were too small.