So a great debate that rages online is whether it’s best to invest in new hand planes of Lie Nielsen/Veritas quality or to pickup an old Stanley (not the new!) or similar on eBay and restore. Thoughts? Any truth to the notion that old Stanley’s are the best? Or is it cost effective to purchase a Lie Nielsen from new and be done? Or do you buy cheap (and buy twice) but for the cost you don’t care?

This could go on ‘ad infinitum’…

Well, for what it’s worth - i inherited an old record plane with a Stanley lever cap, it’s at least 60 years old and belonged to a very accomplished carpenter. With the help of you tube clips from Paul Sellers I found out how to tidy it up and get it sharp - after having been neglected for a few years, now it can shave wood and produce ribbons and whispers as it does so. My point is that if a tool is old and good quality and does what is required, and it’s all you can afford it’s got to be as good as anything more expensive on the shop shelf. When the time comes, and it’s possible to buy better tools then feel the difference between them - but never look back at the old tools with anything less than respect for them. They were good enough when they were all you had.

Lots of valid points here @Wooditorknot and much depends on the depth of your pocket. Good tools are good regardless of how old they are with the obvious caveat of being well looked after; the same can be said equally of a bad tool. Buy a Record plane from the 70’s and you could be throwing your hard earned spondulicos down the drain…on the other hand, if you’re lucky, you might not.
When I was at uni (Shoreditch) in the 70’s, one of the lads had difficulty in making his brand spanking new Record No.5 jack take any sort of a shaving. When he called me over to have a look at it, I placed a Maun straight edge (which I still use) across the sole to reveal that it was more like a banana than a woodworking tool…2mm hollow!!
If you have cash to splash, then I’d always advise going for the LN, Clifton or Veritas option, but where the budget is more restricted, then offerings from Peter Sefton (Woodriver) or Matt Platt at Workshop Heaven (Quangsheng) are worth considering as both are reliable, usable brands straight ‘out the box’.
Where there’s even less of a wedge to play with, the Ax ‘Rider’ range is another viable option, with the proviso that the planes will need some fettling to make them work sweetly…which means that the new owner will need to know his or her way around a bench plane!
Buying an older plane is usually a good way to start out, where for example, a decent pre-war No.4 can be bought for around £25. To bring this sort of purchase up to the performance standard of a LN is perfectly feasible, but it takes a lot of time to fettle. The No.4 is one I did a few years ago which is just about as far as I was prepared to go to produce something that looked reasonable and more importantly, worked well; note an original Clifton forged blade. 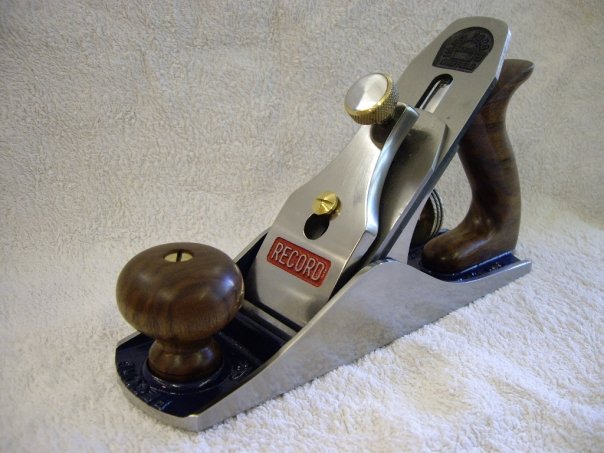 That No. 4 plane is a work of art and a labour of love, beautiful, thanks for sharing that - it raises the bar for me, most definitely. The pointers on possible purchases is very helpful, and I really do appreciate there is a difference in the high end tools and the tools being made under established names but without the same materials and craftsmanship when they were made originally. I try to buy the best I can afford, and would rather wait to get something decent than commit to a purchase that I can’t use. Again I’ll mention Paul Sellers, he pointed out the pitfalls of buying a cheap spoke shave, but added ways to remedy them, so being prepared and limited in funds I plunged in and it was as he predicted, but with patience; an ounce of common sense and a few decent files I had a tool that is serving well - until I deserve better

That plane is a beauty!

Does anyone have a view on flattening plane soles? I tend to clamp without frog between two angle blocks (with jacks front and rear) and grind on the surface grinder. This works up to a Record no. 6, beyond that I would need a longer traverse. But I know nobody else who does this, but my experience pushing things on abrasive sheets is that they end up convex.

Stick silicon carbide sheets (wet n’dry) to 10mm float glass at least a metre long; you’ll end up with a dead flat plane sole, but it’s hard graft. Use a permanent marker to highlight the highspots across the sole.