Types of wood for turning

Hiya folks, have a bit of a dilemma, does anyone know or recognize the type of wood I have just turned? It’s about 12" by 4" had 2 coats of thinned cellulose SS on and 2 thin coats of Hampshire Sheen High Gloss.
I’m thinking, "could be cherry - mahogany or what?
TIA
B

Hi Bryan it looks like some timber I was given by a friend who didn’t know what it was but it was mahogany and when I had finished my project it looked exactly like your bowl. So I would say it’s mahogany. It maybe the lightning on your video but it looks a little bit “ reddish “ to be Cherry. Hope this helps. Keith

Sapele would be my guess; especially if it’s timber that was available recently and not too expensive.

Thanks Gordon, I bought the blanks from an Antiques shop on a farm which has all sorts of brick-a-brack.
I think it was just something that someone just wanted rid of.
I’ve never turned sapele yet, so I couldn’t be sure but thanks for your opinion I’ll do some further investigating.
Cheers.
Bryan

Thanks Kim, no real need just now, I’ve just made the damn bowl into a funnel!
So I’ll be off to Martin Saban Smith’s site to order my funnel t shirt.
it was starting to look good, as well.
Cheers Kim 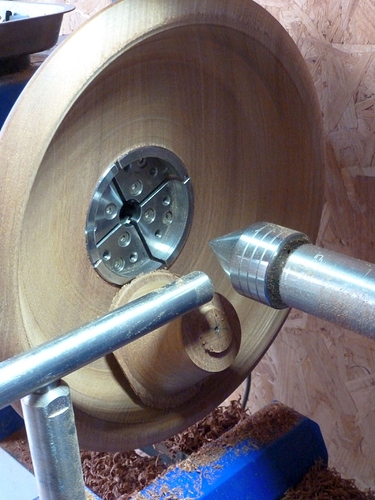 Hi there, I reckon thats Sapele. Here is a picture of a wood mallet I made last year but never had the heart to use. It has the same grain structure and that beautiful irridescance as you turn it in the light. 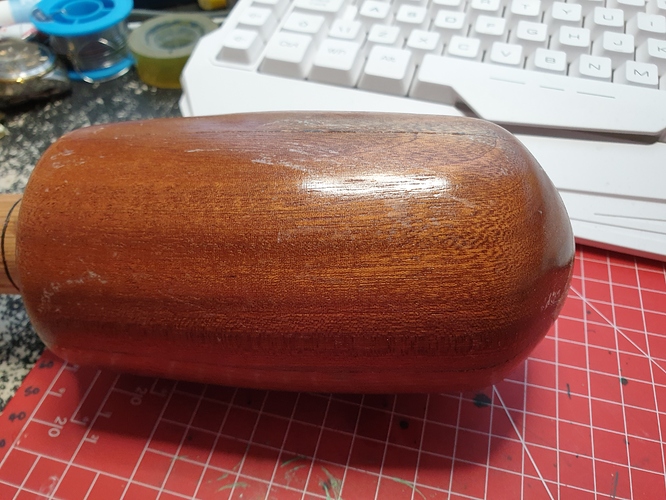 Cheers Red, but as you see,(in my reply to Kim), it’s no longer a bowl, (sod it) my fault too much in a hurry. I must say, it does look very much like your pic, (not quite as red), and the grain structures are almost exact. So unless some comes up with a photo of some mahogany I’ll just have to go with the majority and call it a Sapele Funnel (sadness)!
Thanks Red
B

Your funnel can probably be turned back into a bowl.

On the odd occasions that I have done the same I carefully trim the new hole back to the chucking tennon. Do so with the slight taper with the open end to the top. Then turn a contrasting ‘plug’ with the same taper and turn it so it fits snugly and the lower surface is just touching the chuck in the hole. Glue it into place and remount it on the lathe and turn it flush with the inner surface of you bowl.

Now you have a lovely bowl with a contrasting ‘feature’ in it.

Thanks Jonz, but I’ve already done exactly that. LOL

JonzJob Here it is, not very good but managed to save. Couldn’t sand it properly so I put some Howards F&W on the inside and going to use it as a fruit bowl.
Special, “intentional” design, eh? LOL 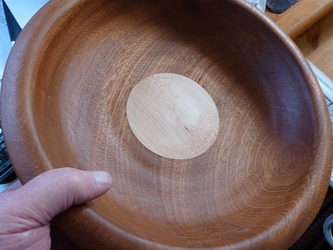 Sorry for the delay Bryan, but I have just looked in. It looks really good to me, especially for a first try at a Special “intentional” design. You got a very good fit to the insert mate, well done. That isn’t so easy and I have a coupel that I wish were as good! The contrast looks good too and if I were you I wouldn’t hide it.

After all, you don’t want to waste wood. It doesn’t grow on trees you know, not like money ?

LOL Yes, that was my idea. If it didn’t fit well - bin it. But it’s ok I suppose. Well, nice chatting, I must go and eat my roast lamb now, happy turning!
B

I have a big board of Castello in the 'shop which is almost identical to Boxwood. Noodling around on t’interweb the other evening, one site recommended it as the finest turning wood on the planet.