Those of us who are lucky enough to own a BS11 bandsaw (508475) will appreciate just how good a machine it is; however it’s not without it’s niggly faults, one of which I discovered the other day. Part of my routine maintenance is to clean out and lubricate the blade guides, which tend to get rapidly choked with saw dust and small off cuts.
To my dismay, I found that the lower inboard bearing is perilously close to the chassis so that the slightest amount of sawdust will cause it to seize and fail to rotate. When I checked it out, I found that it was impossible to even fit a very slim feeler gauge 'twixt the bearing and the framework of the machine. Not good…
I stripped out the bearing assembly and drilled a 10mm hole in the chassis, using small drill increments. This is difficult to do as the drill will be at an angle, so I advise caution. Also make sure that you PUT A SCRAP OF WASTE WOOD between the tyre and the chassis!
Once the drilling has been accomplished, I used a Proxxon mini-drill and conical grinder to enlarge the hole until there was plenty of clearance round the bearing. 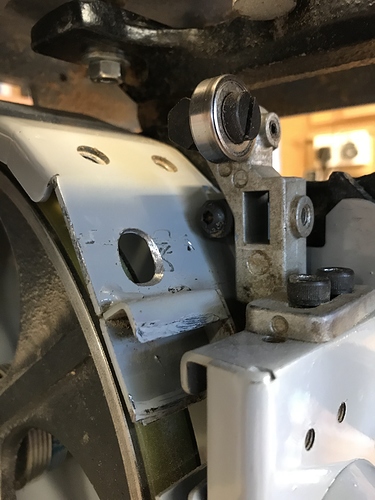 Showing the completed and ground out hole. 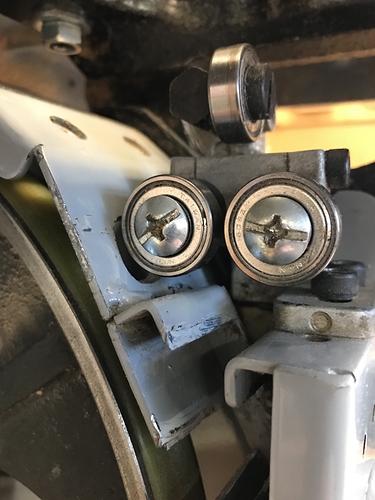 With the lower bearings in place… 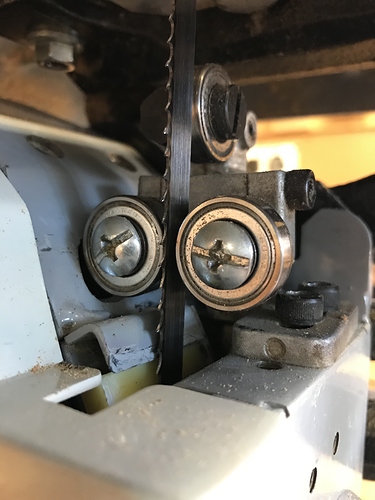 …and fully set up correctly with a DG blade (505222). Note that the lower blade guard has been removed. If you have one of these bandsaws, this is very useful little mod that could save a lot of grief later on as well as coughing up some hard earned spondulicks for a seized bearing.

Well done. Looks as though this might be a failure at the design and/or manufacturing process? It’s not exactly a cheap piece of kit is it?

Nope, it certainly isn’t but it’s about as bullet proof a small bandsaw as you’re liable to find anywhere. Thus far, I’ve been really pleased with mine. The other thing that I found next to useless was the fence fine adjuster which I summarily ditched in favour of something much simpler.

Would it not have been possible to stack the whole guide assembly up higher towards the table? this would have the added benefit of supporting the blade at a shorter distance from the upper guide.

Could have done that in theory, but the blade isn’t supported anyway as the roller guides don’t touch it. This way works well and thus far the inboard bearing isn’t clogging anymore with detritus.

As soon as you pressurise the blade with the stock you are cutting the rear bearing is in touch with the blade, any movement in the grain of what you are cutting moves the blade from side too side and the guides prevent it from moving too far, just thought it was a simpler solution to cutting holes in the bandsaw.

Yep, I’m aware of that when the blade is moving. In stationary mode, the bearings don’t touch the blade.

In stationary mode its a paperweight.

Well gentlemen I am seriously impressed with your mechanical expertise…Brings me to thinking I need give my Elektra Beckum a bit of attention.
Ok it’s not handraulic but surely a little deviation is allowed.

Forget everything you know about setting up a Bandsaw and follow all the rest on UK workshops and set it up as per the Alex Snodgrass video: http://www.ukworkshop.co.uk/forums/bandsaw-set-up-t109318.html everyone and I do mean everyone that has followed his method of setting up a Bandsaw have amazing results, including your truly.

Happy New Year to all on here.

Yep, I saw him do this elsewhere and posted it on the Ax site. If you look here: https://knowledge.axminster.co.uk/setting-up-a-bandsaw/ it’s the same method. Works a treat.

Lots of differing opinion on machinery, but for me the bandsaw is the most useful of the lot. Apart from a planer/thicknesser. And a pillar drill, not forgetting a disc sander, router table, Jet 16-32 drum sander and lathe! HNY…

Yep, I saw him do this elsewhere and posted it on the Ax site. If you look here: https://knowledge.axminster.co.uk/setting-up-a-bandsaw/ it’s the same method. Works a treat.

And for you/Axminster to blatantly plagiarise the Alex Snodgrass set up procedure and not credit him is not very honourable to say the least.

The Axminster site says the plagiarist is Mark Smale, but you have claimed credit for posting the set up procedure, according to your handle you are Rob Stoakley so which one of you is the plagiarist?

There is that arguement of course, but the opposite side of the coin is that it was something posted on t’interweb and as such is ‘out there’ in which case it’s a free for all. As an example, there was a piece I did a couple of years ago where I wanted to give credit to the originator; I was told that as the original idea was on the internet and had been posted widely prior to my piece there would be no recognition given. This sort of thing happens in different ways on all sorts of social media platforms and sadly it’s a sign of the times we live in. C’est la guerre.

I consider giving credit where its due is good manners taking credit for someone else’s work even if freely available is not.

You’re right, but unfortunately it’s not the way the world works. Accept it and move on.

The lowering standard of manners in your world may be acceptable to many, but why not turn over a new leaf in this new year and try to change your perspective.

I have absolutely no desire to continue this conversation. If you wish to debate the why’s and wherefores of of this sort of topic, there are probably better and more suitable forums for you to join. The Axminster forum is about woodwork in all it’s forms which I’m happy to discuss; this type of topic is not one of them. To be really picky, you posed a question in your post but I see no question mark.
I will not, say again, not discuss any further issues of this sort. Stick to woodwork and we ought to be able to have meaningful conversations, but otherwise you’re on stoney ground.

And that is the best you can come up with seem like a case of LMF.

Gentle men gentle men let me be a mother to you both and poor oil on troubled waters…I agree manners are essential and we see a graduale erosion I am very afraid to say.
I also see sense in keeping this to woodwork and not deviate to the point where another might take offence, at the same time both to respect another’s opinion.

If I may quote the words of Benjamin Franklin in 1787 when two faction at a convention where locked in opposite opinions?

“When a joiner wishes to fit two boards together he must take a little shaving from each”. Words you two learned gents might find hard to swallow especially as it is best done with a number 4 smoothing plane…ha ha

Happy new year to you both and others…John