Dado blades on a table saw

I have read a long thread about using a dado blade on a table saw. For the narrower dado why can’t we use two standard blades stacked together?

If your saw is rated to take a dado stack (long enough spindle + capable of handling the larger spinning mass, including meeting spin down times if you’re in a commercial environment) then I guess the answer is “you probably could”. However, you’d very much be on your own in terms of whether the geometry of the teeth would be suitable (or safe) for the application.

It’ll probably work, but I’d be nervous trying it, and certainly for a thinner dado you’d likely be much better off using a router table. Where the dado stacks shine (IMHO) is when you’re needing to route large quantities of wide (e.g. 3/4") dadoes; whereby a table saw will do the job quicker than a router.

Thanks Gordon. Does anyone make “fat blades”, such as a blade that is a quarter inch thick?

There is this (https://www.infinitytools.com/8-flat-top-blades) but it’s quite expensive, and has a 5/8" arbor, so won’t be suitable for “modern” machines with a 30mm arbor. For 1/4" wide cuts I’d still use a router table though!

You could run the piece through the table saw twice, making the necessary adjustment to your fence to prove the wider (1/4”) cut, but obviously this it a more laborious process, but probably safer than trying to use two blades at the same time…I think the thing to remember is that a table saw could do you serious harm…so taking chances with it’s operation and your safety is a rather stupid thing to do…be safe…

I imagine tbat two blades pushed together woulddamage the carbide tip as they would grind and graunch over each other. That in itself I imagine would be dangerous as bits of carbide might fly off like bullets 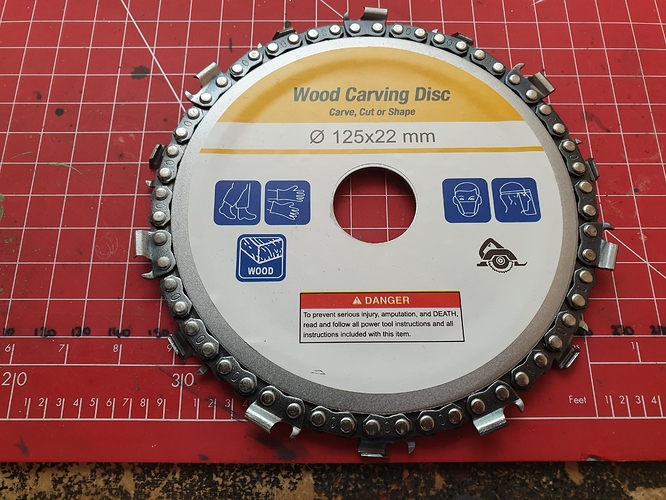 Would one of these work? I have used various diameters on my angle grinder and there are certainly a number of blade widths available.

I’ve experience of those so can’t comment. But I imagine that chain design restricts them to smaller diameter blades rather than the standard 10" table saw blade.

How you use you saw is entirely up to you, however my recommendation would be to avoid dado blades at all costs. To use a dado blade the riving knife needs to be removed (a riving knife on a dado blade will be of effect), which for me is just insanity. @Stu93 suggests making multiple passes through a saw which is a far better method. My preference is a router, it may take a little longer, but there is more chance of keeping all of your fingers attached.

In commercial use there are strict guidelines on dado cutting. Page 4 here gives the best advice. https://www.hse.gov.uk/pubns/wis16.pdf

All. Surely the riving knife is only there to keep the two pieces separate after the cut!!

With dado cutting, this isn’t an issue is it? Also the dado cut doesn’t come above the wood so again much less chance of damage to fingers…

The blades of a dado cutter are never two standard discs clamped together, but with shims to adjust width, and these shim blades have many less teeth. Hence main blade cutting teeth not grinding together.

I know this debate will continue.

There have been some good disaster videos using chain saw technology on circular blades, worth a look before taking (IMHO) a big risk…buy at least in a fixed situation, not in a hand held grinder, they “should” be that much safer…;-(((

All the best
Barry

You can use two standard blades stacked together also. I used it.

The riving knife doesn’t serve “to keep the two pieces separate after the cut”. It’s function is to stop either of the cut-through sections of a workpiece from skewing into the back of the blade, where the rising teeth will employ the 2-3 horses of the saw motor to grab and throw the workpiece at your head. This is a common “accident” in the US, where they often take the attitude that they “don’t need no steenkin’ riving knife”.

With dado blades you would need a riving knife as wide as the dado blade width setting. No one makes such a riving knife. If you have or make a sled that absolutely straps down the workpiece so that it can’t skew when making the cut, this would obviate the need for a riving knife. Many dado-using fellows simply push the workpiece down the fence side as usual. A skew and a grab by the rear teeth rising out of the saw table will kick the workpiece back. Being wide, it will get you one way or another.

I didn’t know whether to reply, or let this drop…

The two pieces of wood being separated after the cut is the same as not being able to skew into the blade, surely:: , and on a dado stack that can’t happen anyway, as the wood isn’t cut through!

You could say that a riving knife is keeping the two pieces cut-through apart as that’s what happens. But the essential function of the riving knife is to stop either piece being caught, lifted then thrown back by the teeth rising out of the table at the rear of the blade. “A pedantic semantical”, you may cry! But what matters is to prevent the kick-back, not separating the wood bits.

With the dado there aren’t two bits of wood, as you say, since there’s no through cut. So the riving knife function (were there a riving knife there) isn’t to keep two pieces of wood separate. There’s still only one piece of wood. The function of a riving knife sitting behind dado blades would be, as it is normally, to stop the rising teeth catching on the uncut wood adjacent to the dado wall and throwing the wood up and back.

Imagine the dado-ed workpiece being accidentally skewed away from the fence at the rear of the blade as the workpiece is being pushed over the dado blades, because there’s no riving knife to stop it skewing. The rising rear teeth will catch the dado wall and kick back the workpiece … the whole workpiece. This happens a great deal in the US of A, where they “don’t need no steenkin’ riving knife”. Even if the pusher is standing to the left of the blades (as is normal) the kicked back dado-ed workpiece will hit him. If it was a through cut, the kicked back piece would likely be that to the right of the blade and would likely miss him, merely skewering the shop-cat to the wall. Dado blade kick back is thus more dangerous to the operator (if not the shop cat)!

If a normal (3,2mm thick) riving knife is left in situ behind the right-hand dado blade, that would be enough to stop a workpiece skewing into the rising rear of the blade, just as with a through-cut workpiece … as long as the riving knife is a low-profile version with a height just below the height of the highest point on the dado blades so the workpiece can pass over it. But are table saws that can take dado blades so-configured with a riving knife? I don’t know.

Have you seen Stumpy Nubs YouTube video on these chainsaw type blades?

These look a bit deadly to me. Chain slippage, loosening, and eventually coming apart.

Hi Wilhelm, thanks for mentioning the Stumpy Nubs video. Both my chain cutters are now in the bin. I knew they needed extra care but to see how his accident happened is chilling. Even worse was the guy with the neck and hand injuries.
Thanks again and I hope anyone who has one of these cutters watches the video.
Steve

Hi Red.
Since posting this I have spent a couple of days at The Derby Hand Clinic having my fingers debrided after a circular saw accident.
A word of warning. If you have a fluorescent lamp over a table saw the stroboscopic effect of these lamps can make the blade look still. I turned it off and went to remove some plastic that had split to find the blade still running-down.
#What ever happened to auto braked saws?

Thanks #Stu93 won’t be going there again.